Look at your child right now!!!

Look at your child right now!!!

Whether they’re a hormone exuding teen, or a monstrous mite, there is a fair chance, as you cast your gaze over them that they are sitting with poor seated posture.

Increasingly, evidence shows that prolonged sedentary behaviour factors into your child’s health and well being on its own, unrelated to their weight and periods of time they spend exercising.

I-pads and other devices have displayed wonderful abilities to keep children entertained and pre-occupied, often in situations where they may otherwise become bored and disruptive. Whilst these fantastic distraction tools are keeping your little tyrant from making farting sounds in the doctor’s office or writing on walls at the hairdressers the amount of time spent on devices is on the rise.

A recent study has shown that schoolchildren who used computers, tablets or watched TV for longer than 4 hours a day had a significantly increased risk of low-back pain (46%), when compared with those who managed to spend less time in front of screens. 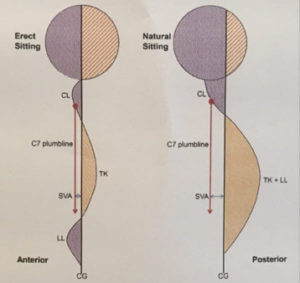 The reason low-back pain becomes prevalent is that the slumped position your child has adopted whilst sitting has led to a loss of the natural concave curve in the lumbar spine, known as lordosis. The now ‘natural’ slumped position your child assumes when sitting has a drastic contrast to erect sitting when comparing spinal alignment. The significant reduction in lumbar lordosis causes the weight of the trunk to be shifted posteriorly, in order to maintain balance an anterior lean is now adopted by bringing the head and upper back forwards. The altered spinal mechanics leads to an uneven distribution of force through the spine, causing several segments to bare the brunt of forces applied, making them more susceptible to injury and wear and tear.

As you stare at your doubled over child, noticing now more than ever just how close they are getting to their tablet device, fear not there is still hope for them yet. A postural assessment by one of our osteopaths can identify where the toll of poor seated posture has taken affect on their spine. Once identified, a combination of massage, mobilization and manipulation can rectify the spinal dysfunction. Our osteos will also provide exercises, corrective taping and education to ensure a more upright seated posture is adhered to.

A quick video demonstrating how to tape the shoulders and back in order to promote erect seated posture is attached below. Rocktape can be purchased at the clinic for $20.